They Think They are Safe – Ivermectin

‘They think they are safe’: Doc issues chilling warning as people taking ivermectin continue to die

Original article by Paul Ash, Senior Reporter from Sunday Times
Leading pulmonologist Dr Emmanuel Taban has pleaded with South Africans not to be misled over claims on social media that ivermectin will protect them from Covid-19

A leading pulmonologist has issued a stark warning that all the patients now admitted to his clinic thought ivermectin would protect them from contracting Covid-19.

In a chilling Facebook post, Dr Emmanuel Taban, a pulmonologist at Mediclinic Midstream in Midrand, wrote that two out of every three patients now being admitted to the hospital were taking ivermectin which, he added, offered “no benefit at all”.

While 80% of the patients admitted to the clinic during the first wave were black, of the 102 patients now admitted, 92 are white as a third wave of infections continues to roil across SA.

“Most of these patients have been taking ivermectin which was prescribed by doctors and as a result they feel protected,” he said.

He warned  that people using the drug — which is an anti-parasitic medication meant for animals — believed they were safe from contracting Covid-19 which in turn led to unsafe behaviour such as not wearing masks or sanitising their hands.

Some 90% of the patients using the drug, had presented with liver damage, he added.

“I have lost five patients to liver failure from ivermectin and all patients now admitted here have all been on [the drug],” he said.

Taban was critical of doctors who continued to give ivermectin to their patients.

“Clearly this drug does not work and is not intended for use by humans. I strongly encourage you to stop prescribing it and advise against [its] use.”

A debate over whether ivermectin works continues to rage, with some healthcare professionals calling for its use while others say there is no evidence that it works to prevent or cure Covid-19.

In January, the SA Health Products Regulatory Authority (Sahpra) issued a directive that there was not enough data available on the drug for it to be used in managing Covid-19 infections.

“In terms of safety and efficacy there is no evidence that supports the use of ivermectin we do not have any clinical trial evidence to justify its use,” the authority said.

While Sahpra implemented a “compassionate use” programme which allowed doctors to request permission to prescribe the drug to individual patients under the terms of the Medicines and Related Substances Act, it remained steadfast in its position that there was no evidence that ivermectin prevented Covid-19 or healed infected patients.

Meanwhile, a major study investigating the drug’s efficacy in treating Covid-19 was withdrawn last week after a medical student in UK discovered serious flaws in the paper.

The study, led by Dr Ahmed Elgazzar from Benha University in Egypt and which was published on the Research Square website in November, claimed to be a randomised control trial, The Guardian reported. Its findings claimed that patients treated early with ivermectin “reported substantial recovery” and that mortality from Covid-19 in groups of patients receiving ivermectin dropped by 90%.

The study was withdrawn, however, after a British masters student discovered that the study’s introduction appeared to have been plagiarised from websites and press releases about the drug and Covid-19, The Guardian reported.

There were also issues with the raw data which contradicted the study protocol in a few instances.

Taban urged South Africans not to be misled by social media regarding cures for Covid-19.

“My heart breaks at the suffering of these people because they are being misled by social media,” said the Sudanese-born doctor who is famous for trekking from war-torn Sudan to Johannesburg and putting himself through medical school.

“There is no prophylactic medication available for Covid-19 except vaccination.” 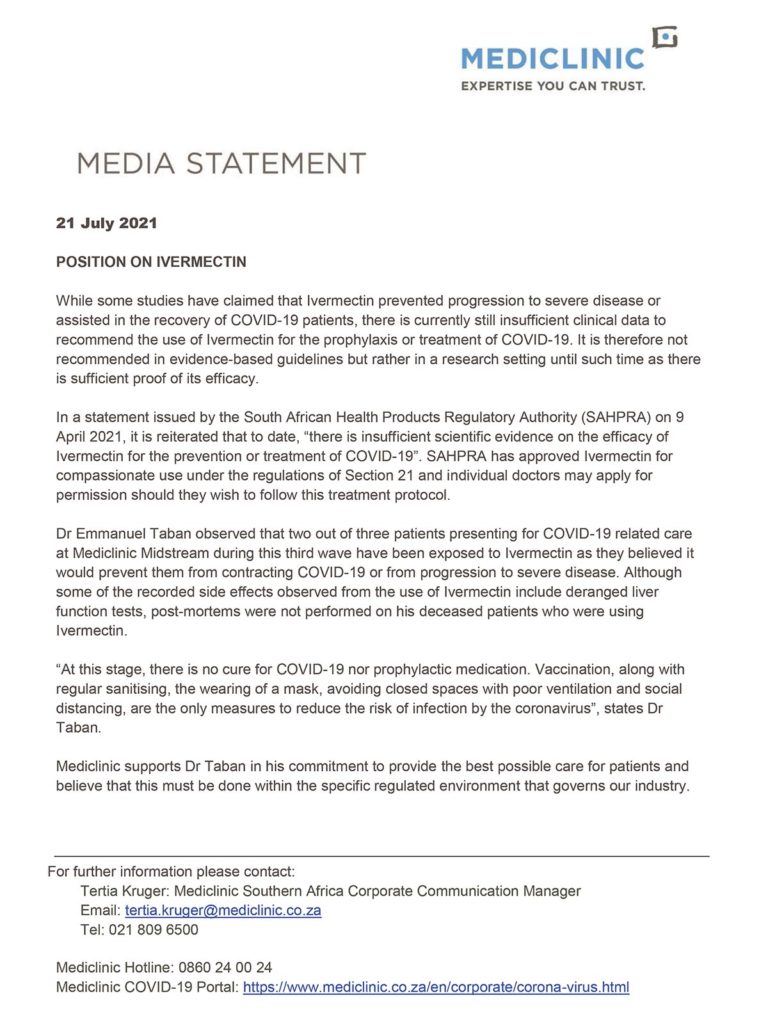