Dr Taban’s Speech for St Peter College: “To be or not to be. That is the question”

When I was a young boy at school the thought of Shakespeare made me want to run in the opposite direction. It always felt like it was just history about people in ancient times and had no relevance in my life. Looking back at that line, Hamlet referred to life or death relating to the pain and unfairness of life and to that I can definitely relate and I’m pretty sure so can you. I guess somethings are still the same no matter what century we live in.

There was many a time in my life when I was ready to give up. The multiple times I ended up in jail, having no food or clothes and sleeping on the streets, the rejection from my family, friends and the world. In all these times I managed to get through and that’s because I never gave up hope. I longed for a happier future and that’s what drove me. 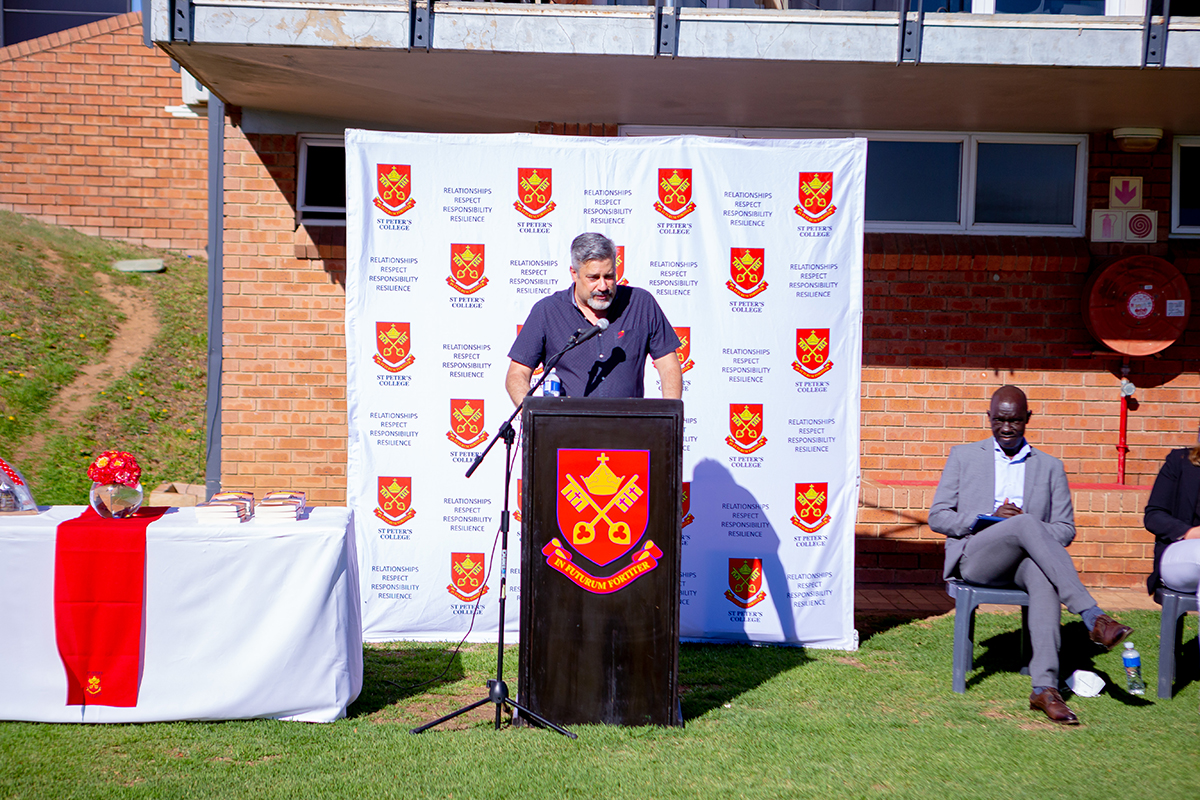 We all start each chapter of our lives asking ourselves a very similar question. ‘To do or not to do’. This question is asked in everything we do whether it be personal or academic choices. Sometimes these choices are fairly easy for me to make and sometimes I have to ponder over it for a while. In these difficult decisions is where I find that the reward is not always financial but sometimes life-saving, meaningful, valuable or ethical. One day whilst I was travelling from South Sudan to South Africa I had come across a river. If I could just cross the river to the other side it would make my journey so much shorter. The river looked narrow enough and I thought it would be simple enough. As I approached the river and made my way into the water I saw a few hippos from afar. At the time I didn’t realise how dangerous they were and I was stupidly brave. They looked at me almost warning me not to cross. I felt the current and depth of the river and I then realised that it wasn’t the fear of the hippos that made me take a few steps back and get onto solid ground but it was their warning that the water was too dangerous for me to cross. Those Hippos saved my life that day. Between the river, crocodiles and hippos I’m pretty sure I would have died if I had attempted to cross. Sometimes we need to look at our surroundings and stop to think before just rushing into things because it looks like an easy way out. 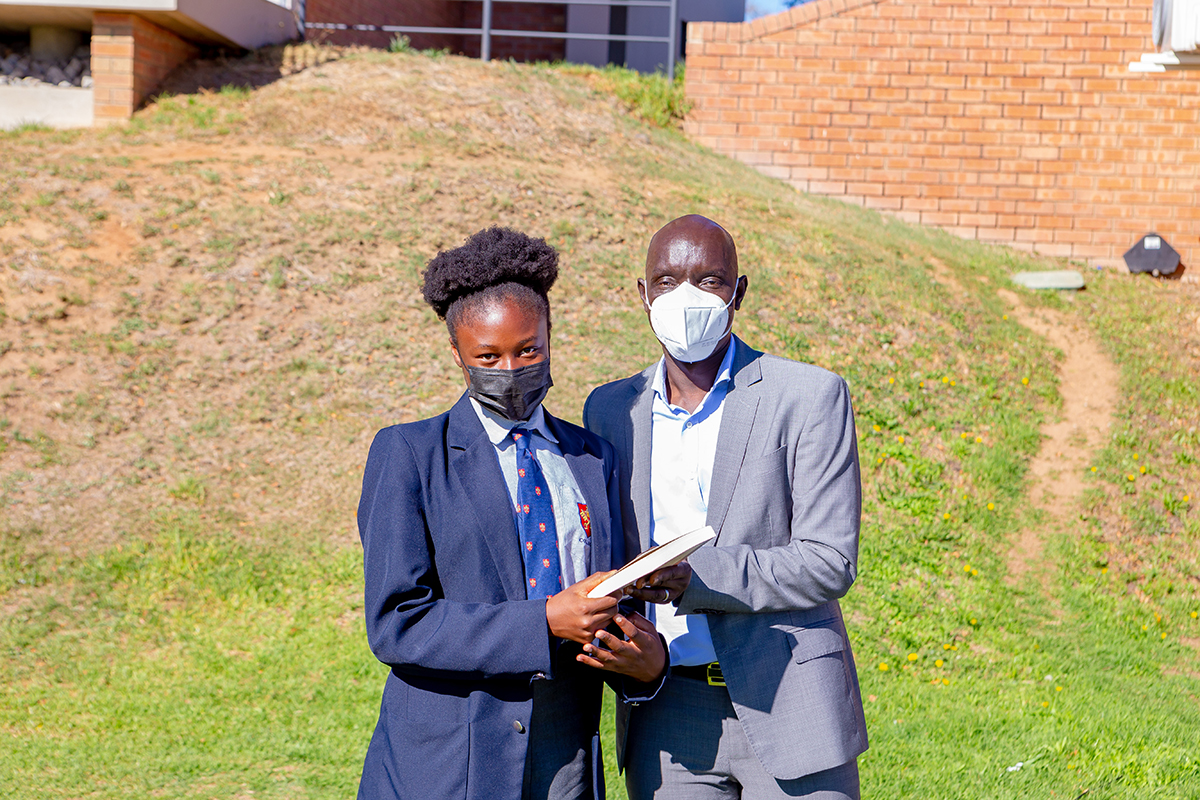 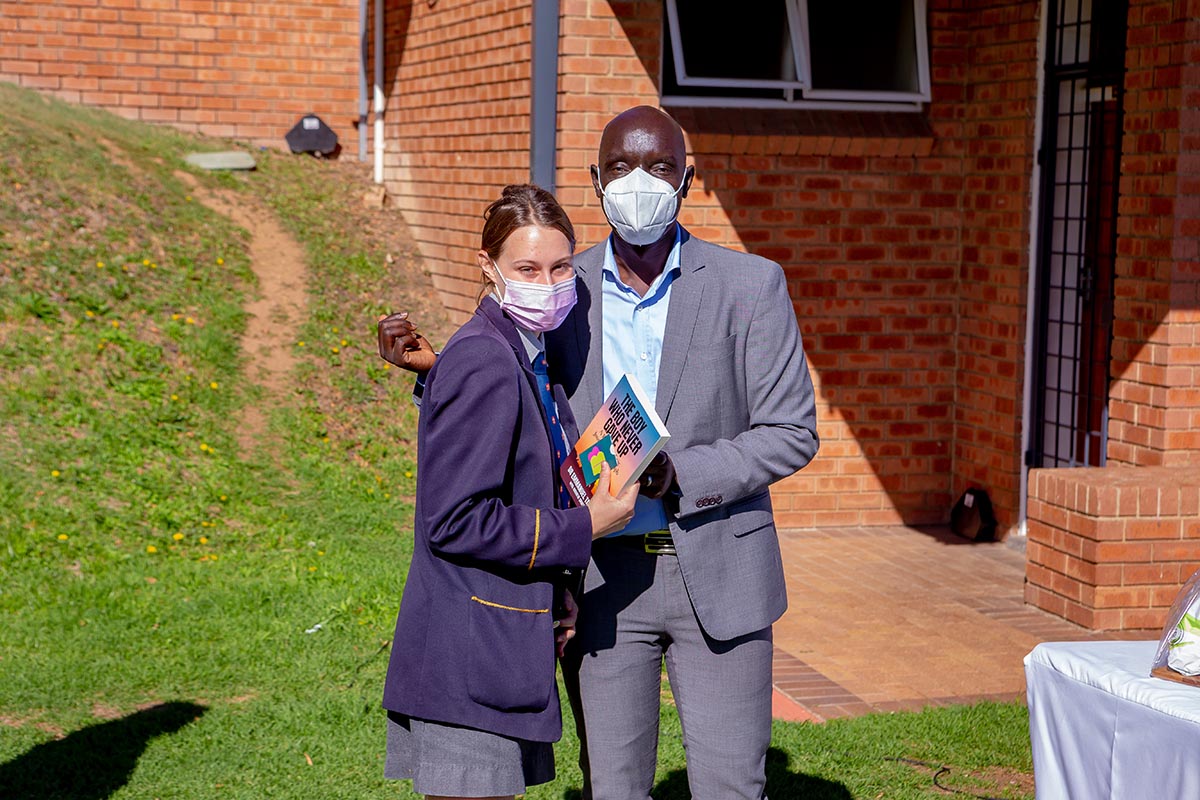 In this age of social media youngsters get so caught up in their own little world that they sometimes lose sight of the bigger picture and long term benefits of hard work. Everyone wants to be rich and successful and sometime the lines between right and wrong gets blurred. It’s important to realise that every choice you make has long term consequences. Never forget the sound values and morals that your school stands for and it will keep you grounded. 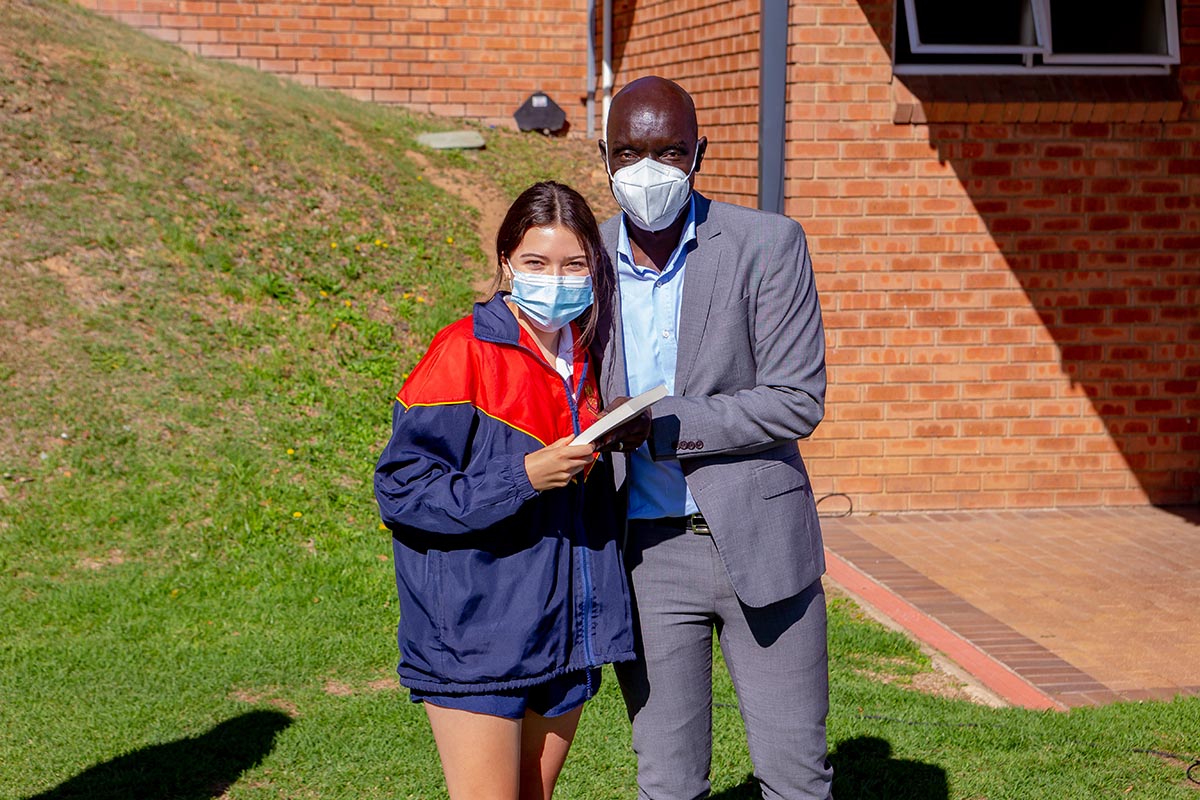 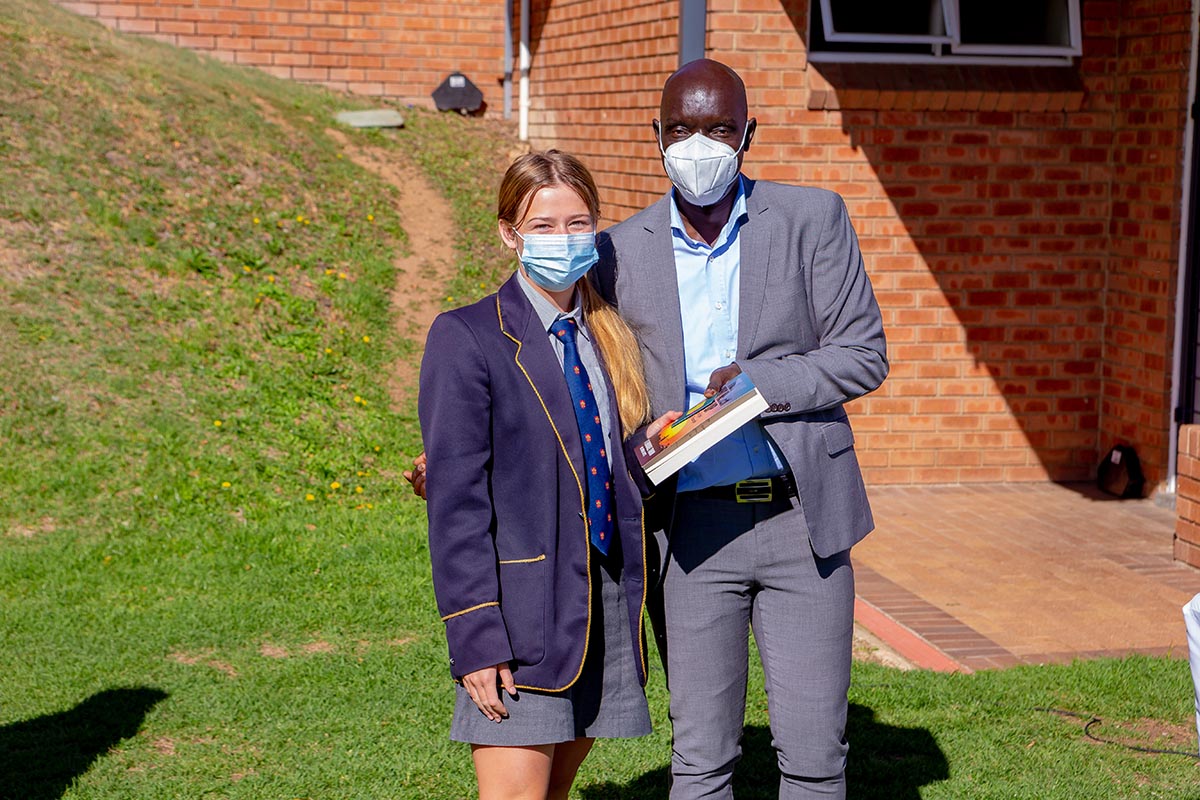 The COVID pandemic has shown us how fragile the South African economy can be. 1st world countries took a huge knock with their high mortality rate but they recovered and got back up quickly. Their deep wounds were quickly aided by the strong system and their belief in their country resulting in economic and emotional stability. We as South Africans have very deep wounds and we need to stop removing the scars and recycling our past. We need to use it as an inspiration for where we want to be. It’s the many scars on my body that remind me of my past and it only makes me stronger for the future. 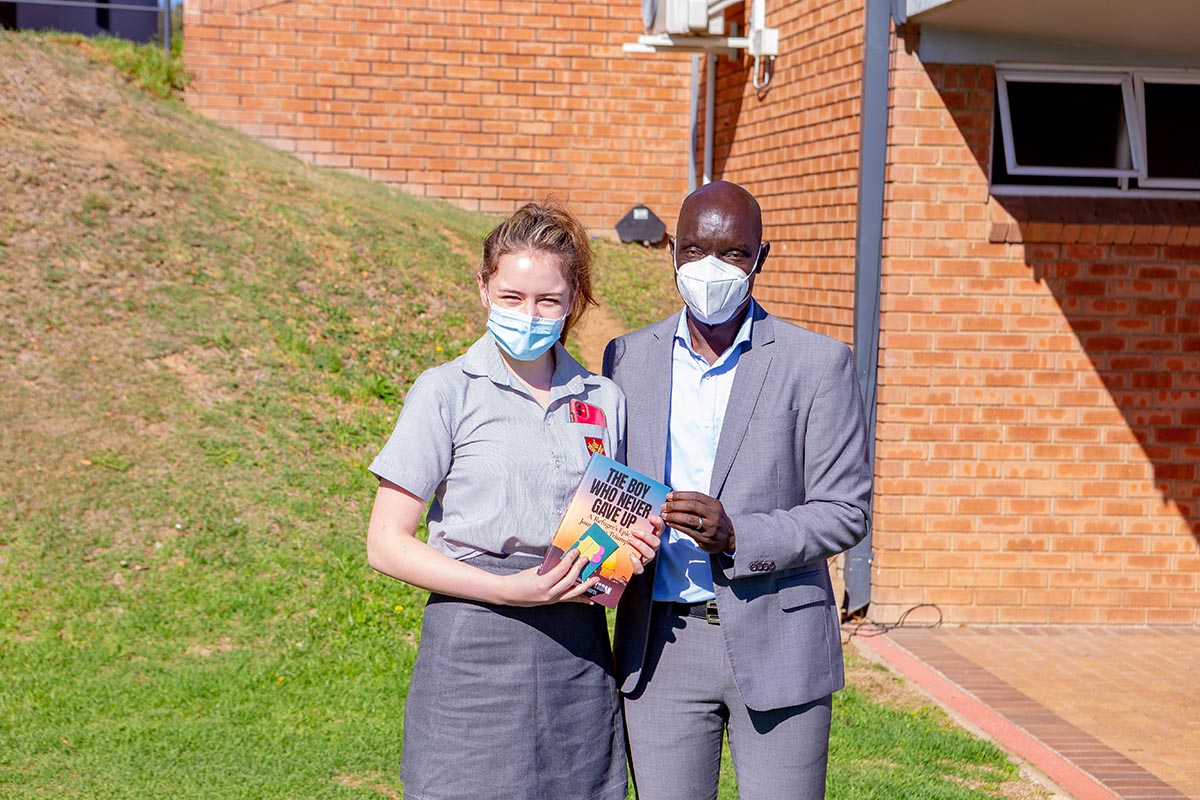 A Google search on South Africa will reveal an unspeakable crime rate, exceptionally high unemployment statistics and economic instability. Every one of you seated here today together with the collective South African youth at large can take us out of this cycle. You are the generation that can use your skills and talents to rebuild our country with a solid new foundation that can’t be knocked down. 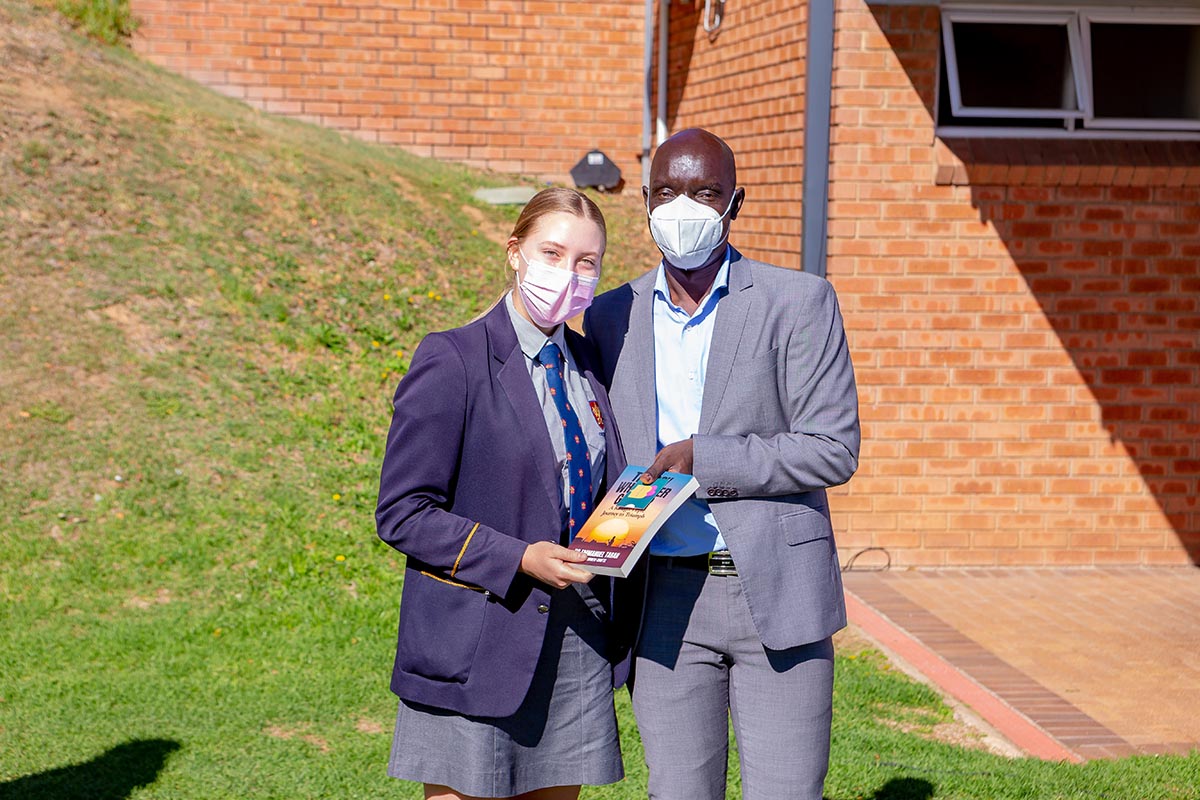 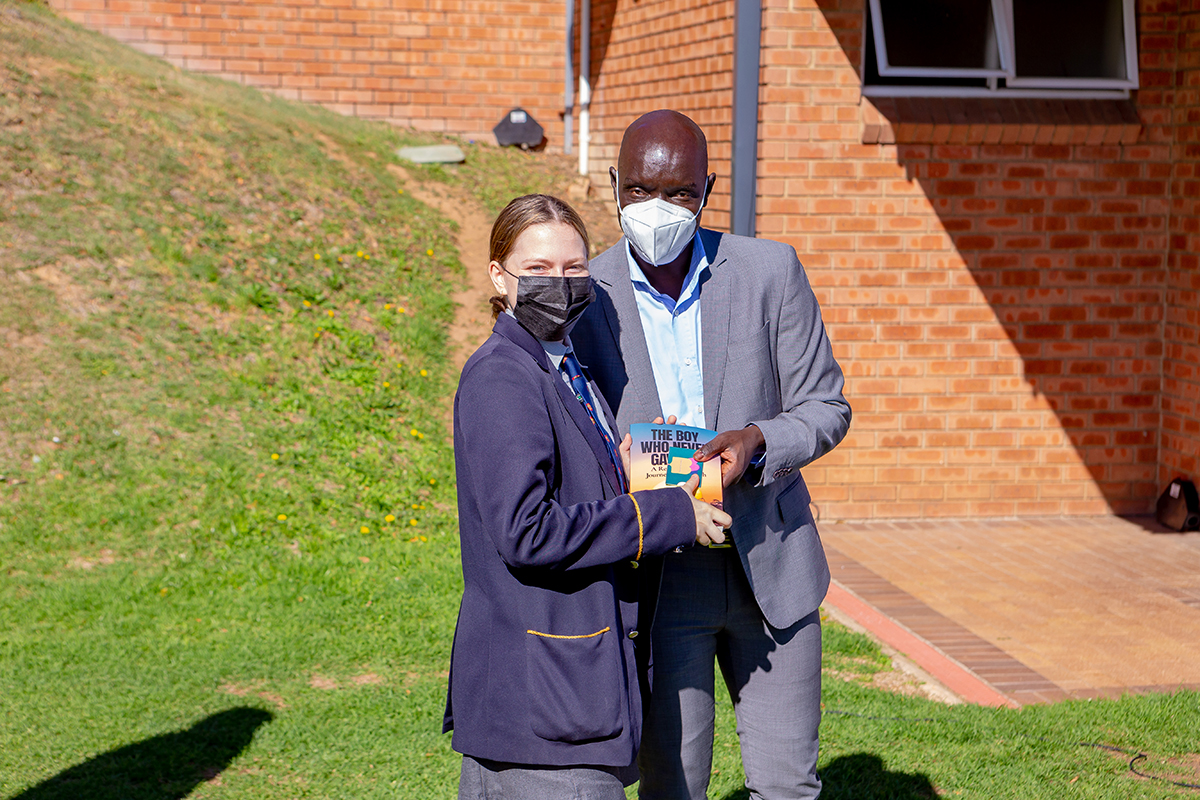 With only 5 years of formal schooling at the age of 18 I realised that I needed an education to unlock my potential. I had just passed my 1st attempt at matric but it was never going to give me the foundation I needed for a good future so I made a decision to redo my matric. This time with focus, determination, passion, prayer and a little bit of help from my high school. If I look back it was an almost impossible task. I was 20 years old with no money, gardening for the little that I received but I dreamt of a better life and today I am a qualified well known pulmonologist with that better life. If I garden now it’s purely for fun. I built a new foundation on solid ground.

When you are down on the ground you can stay down and cry or you can get up and stand together. Let’s develop, inspire and innovate and make South Africa the type of country that we are proud of and not one that we are fleeing from. Let’s show the world that we can rise and be a great and powerful nation. We have the tools, the resources and the untapped potential of this land. We are just as productive, just as intelligent and just as powerful as any other 1st world country but it takes us working together to make it one. A power tool without the skills to use it, the energy to power it and the wood to cut it is a useless piece of equipment with no value. 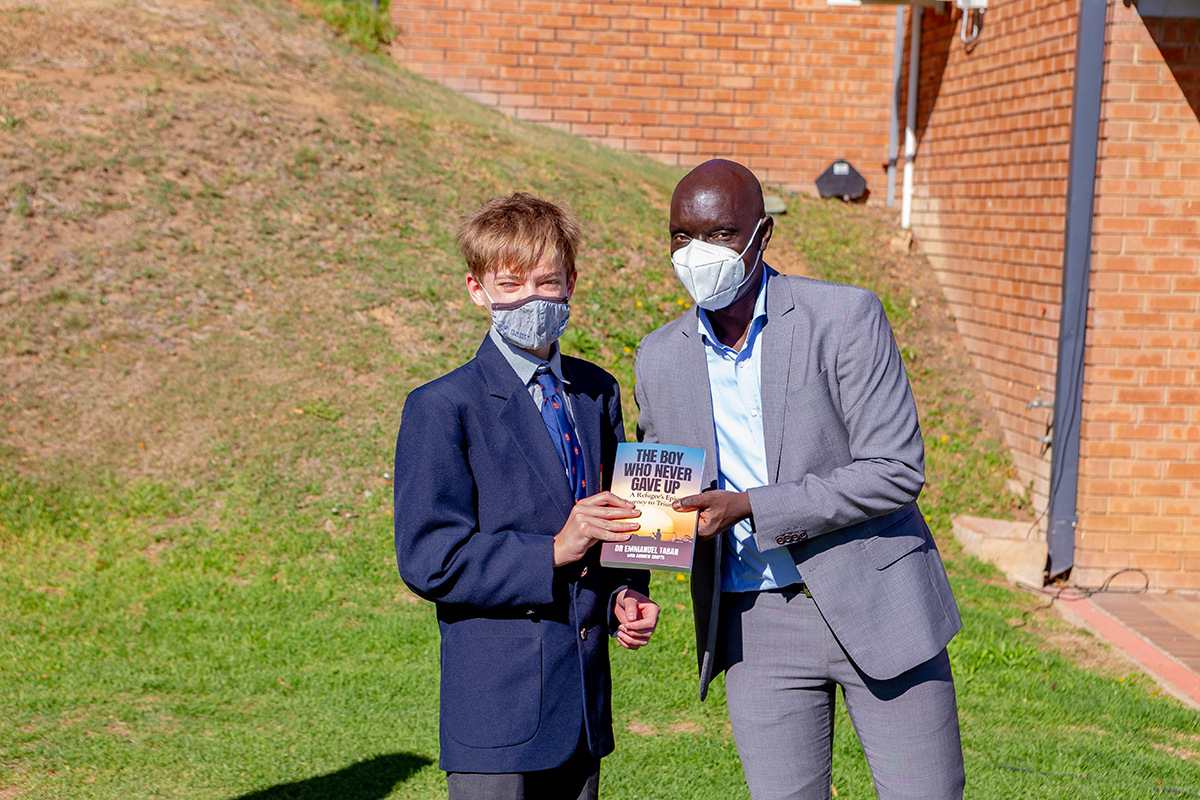 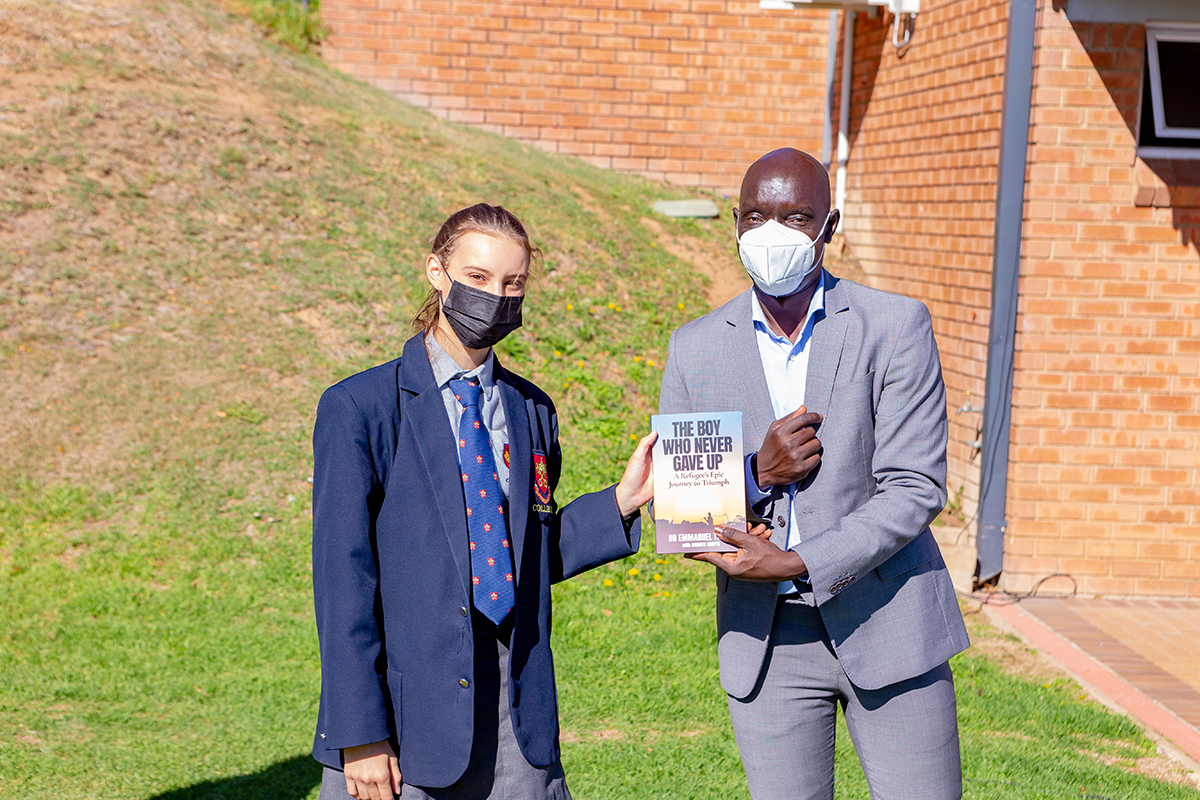 When I was a registrar studying to become a physician it was a very difficult time for me even though I had physically faced so much hurt and pain by then. The registrars, all striving to achieve the same goal, were so segregated. It was generally a racial or gender segregation and it almost felt like each of these groups were fighting each other. We are all different and unique individuals, with different talents and skills. I came very close to quitting a few times in my career because of these differences. If we choose to focus on the value of our different unique talents and work together we could create something amazing. If we choose to complain about how our lives are ruined because of our race or sex or culture, create divisions amongst our fellow colleagues and use it as an excuse for failure, blaming the whole world, then we would probably end up in the same cycle of hate and discrimination that society has made us believe but more importantly we end up disappointed and empty. 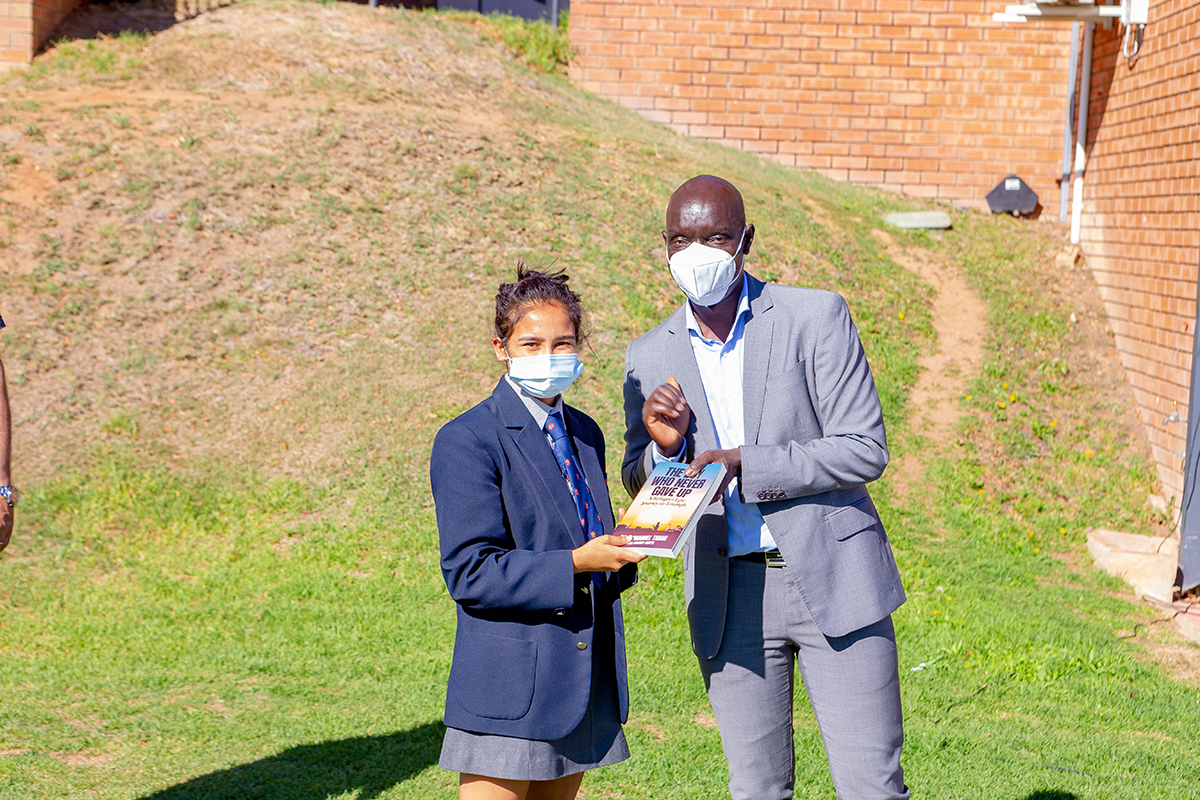 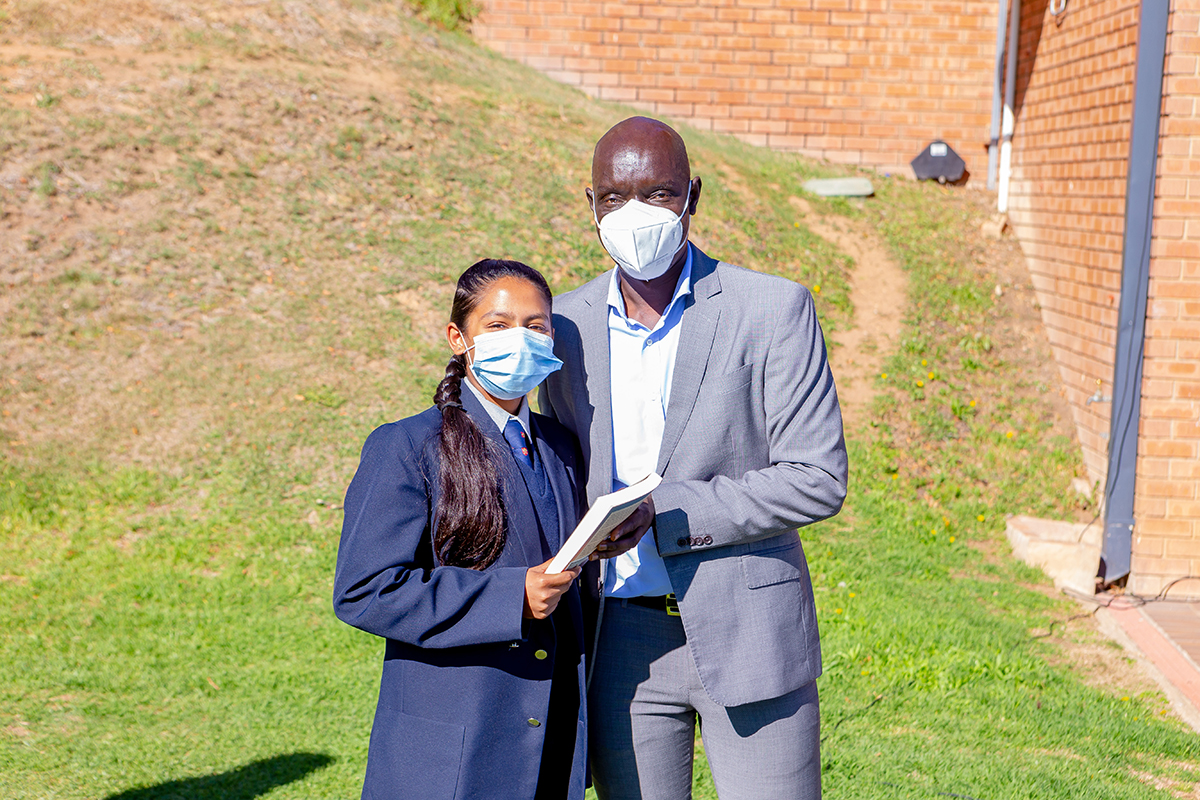 Don’t conform to the world but let’s find a common ground that makes us humans. Cultural differences shouldn’t divide us but accepting that there is differences and understanding where it comes from makes us less judgemental of each other. Let’s find common goals. Let’s try to find a solution for climate change. Let’s work together to achieve these goals.

What if I asked you to close your eyes and imagine an impoverished community far away from urban civilisation with minimal access to basic sanitation. The drinking water is so dirty that cholera is a frequent occurrence, with kids dying on a regular basis because they have no medical care. Imagine little kids playing on the side of the road with no shoes and making toys from junk that they find lying around. Men going away for days trying to find work to support their loved ones. If I asked you to describe this world in your imagination and now imagine that community as a different race group would you still paint the same picture in your head? 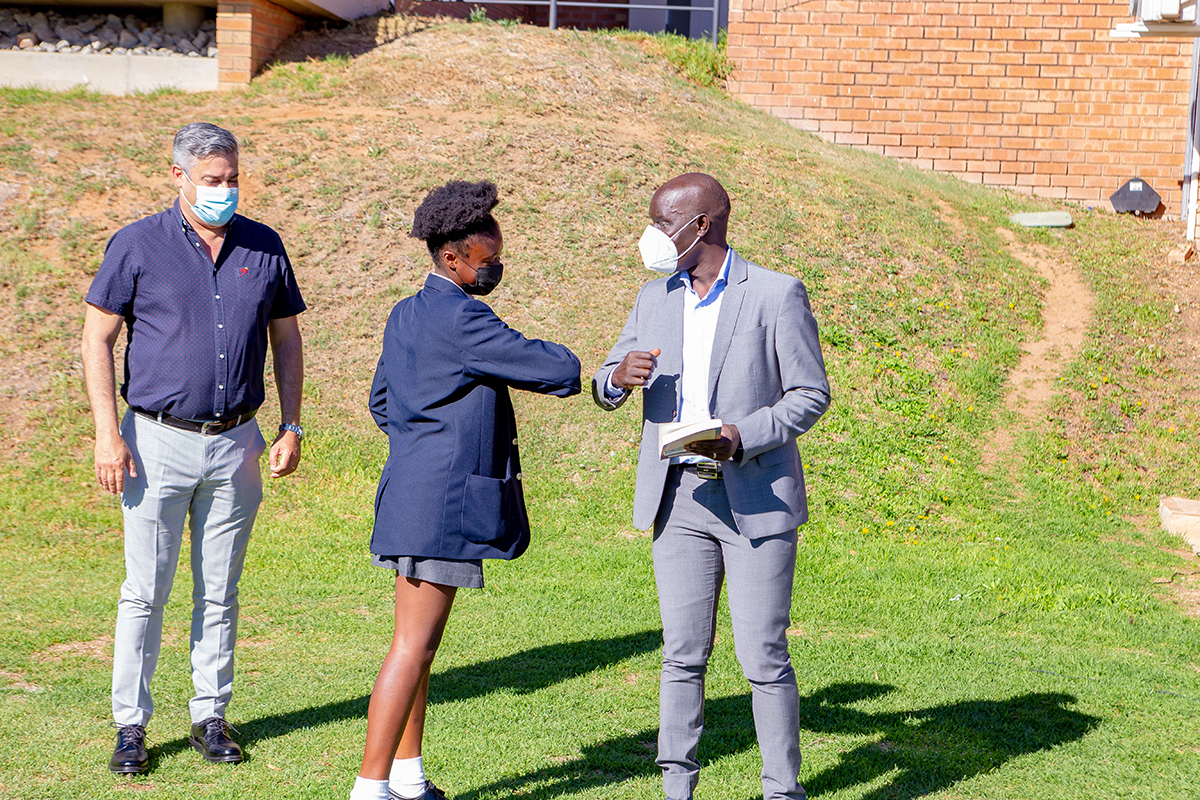 Did you racial profile the community or did you see them as one of you. I don’t quite blame you for being caught a bit off guard. I probably would have felt the same way. It’s because as a society we have grown up to see the things in a specific way. Almost brainwashed into racial profiling whether it’s intentional or not. If you talk about poverty and violence and crime you think about the black community. If you think about fancy dinner parties and art shows you think about the white population. Why do we have to conform to these social norms. You are a young generation that grew up together in 1 class, going out and pretty much being equal among your social status in society. Even society labels us differently. The popular group at school vs the nerds/geeks. As much as there is cultural differences between race groups this should not change who we are and how we treat each other ……as humans.

A guy called Peyo created the Smurf comic series that is loved by kids and adults alike. As I was not exposed to television in my childhood I was only introduced to Smurf’s because of my kids. One day I asked them who their favourite Smurf was. They each chose a different Smurf with different reasons. It was then that I realised that the Smurf community is all blue and kids relate to them based on which personality they like and the smurf they can relate to. It was Peyo that said that smurfs was not designed with any political inclinations and it was actually his wife who made them blue after playing around with a few colours. I found this whole idea of the Smurf community so intriguing. Each Smurf has a special unique talent and personality – papa Smurf, brainy Smurf, chef Smurf and so on. Actually no 2 smurfs are alike. Smurfette who was the female Smurf was created by Gargamel the villain. But the Smurf community took her in and she became one of them. It reminded me of me as a refugee getting a South African citizenship. If we as humans looked at each other as a Smurf community working together, building friendships and looking passed our differences the world we live in would be a different place. We could create a world that Shakespeare could have only dreamed of ….. one without all the tragedy.

My ethos and passion strongly focuses on the worldwide enforcement of Human equality and diversity. I believe that there should be no boundaries when it comes to equality and that it is a true form of unbiased justice. I dream of a world that has one citizenship and the non-existence of refugees. A world that educates and uplifts all people to their fullest potential. I hope this can be your dream too and together we can make it happen. Let’s go out there and build our own little Smurf community. Let’s focus on saving our world together. 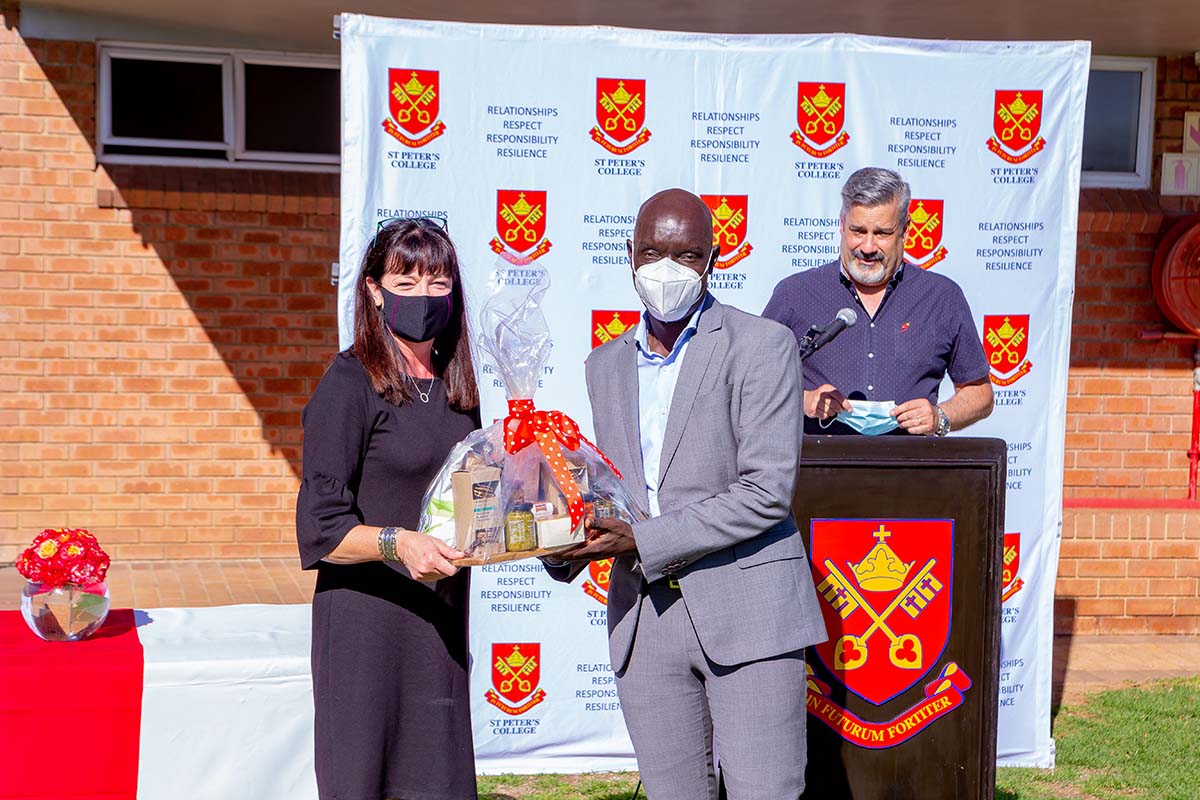