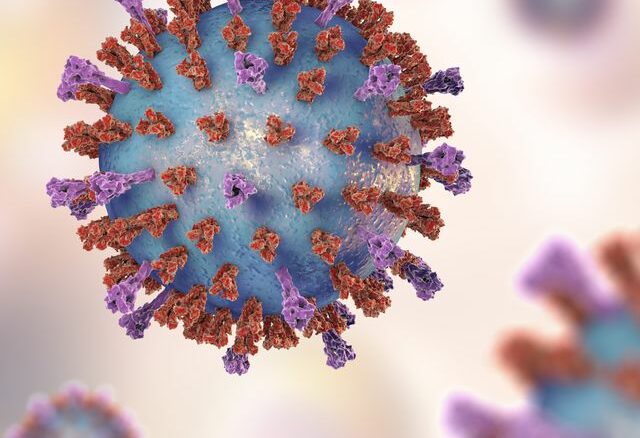 Respiratory syncytial virus (RSV) is a small virus with single-stranded RNA and belong in the family of Pneumoviridae family.

There two types of RSV:

Type A&B:  present in most outbreaks and cause more severe disease and Type B milder disease.

Transmission: the virus is transmitted by direct contact with virus containing secretions or formites (running nose, coughing and saliva) but also it can be spread by droplets aerosols too. The virus can survive for up to approximately 4-6 hours on the hand.  Hand washing and contact precautions are important.

When does RSV season start?

Before the COVID-19 pandemic, the RSV season in  South  Africa  usually  preceded  the influenza  season  with  the  usual  average  onset  at  the  end  of  February  (range  early February  –  mid-March)  over  the  last  10  years.  However, since the start of COVID-19 pandemic, with non-pharmaceutical interventions to prevent SARS-CoV-2 transmission in place, RSV circulation has been disrupted, with fewer cases and out of season outbreaks reported

Mild upper respiratory tract infections: such as cough, running nose, block nose and fever but self-limited by some children and adults can developed Bronchiolitis:

Bronchiolitis is an infection that affects a part of the lungs called the “bronchioles.” The bronchioles are the small, branching tubes that carry air in and out of the lungs. When these tubes are infected, they get swollen and full of mucus. That makes it hard to breathe.

What are the symptoms of bronchiolitis?

As bronchiolitis progresses, other symptoms can start, including:

Most cases of the RSV are mild, and it does not need treatment at all.

Yes. Here are some things you can do:

Can bronchiolitis be prevented?